Arnie Claeys will be the first to admit prostate cancer screenings were not on his radar. At age 54, he felt fine and assumed he was cancer-free.

“I figured if prostate cancer was going to be an issue, it would happen later,” Claeys says. “I had a half-brother who had the disease, but he was diagnosed much later in his life. As far as I’m aware, he was the only one in my family to have prostate cancer.”

It wasn’t until Claeys had a discussion with a colleague that he realized the significance of regular screenings. His colleague had gone for a screening and learned he had prostate cancer.

Screen Time
Claeys’ colleague’s recommendation was not far off from national guidelines: The U.S. Preventive Services Task Force states that men should begin a conversation about screening for prostate cancer with their provider at age 55. Some men who are higher risk, such as African American men or men with a family history of the disease, like Claeys, may want to begin this conversation as soon as age 45.

Bockholt, MD, visiting urologist with Urology Specialists Chartered in Sioux Falls. “However, every patient is different. Prostate cancer screening should be an active discussion between the patient and his provider.”

One in nine men will be diagnosed with prostate cancer in his lifetime, but early detection can help providers diagnose the cancer at its earliest stages, when treatment tends to be most effective. Annual screenings may alert providers to a problem before symptoms occur. Some symptoms, such as frequent urination, difficulty urinating or pelvic pain, could be missed or written off as signs of aging. While some prostate problems are common in men over age 50, they can also be signs of cancer. Dr. Bockholt urges men to talk with their provider about any symptoms they experience.

“Patients who present with symptoms usually have a very progressive or high-risk disease,” Dr. Bockholt says. “They should alert their provider of their symptoms as soon as possible.”

Some men have no symptoms of prostate cancer at all.

“I told my primary care doctor everything seemed normal, and even he said he didn ’t expect to find anything,” Claeys says. “But my PSA [prostate-specific antigen] test came back very high.” 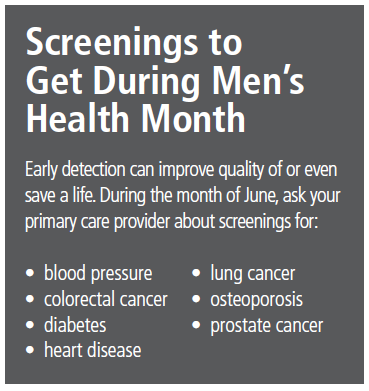 PSA tests, along with digital rectal exams, are the standard prostate cancer screenings Dr. Bockholt recommends for his patients. PSA tests measure the amount of a type of protein in the blood in nanograms per milliliter (ng/mL), and heightened levels suggest a heightened risk of prostate cancer. Most men without prostate cancer have a PSA level under 4 ng/mL on average. Claeys’ test came back with a reading of 14 ng/mL, and a biopsy confirmed that cancer was present and aggressive.

Write Your Own Story
“I wish I could have seen Mr. Claeys sooner,” Dr. Bockholt says. “Fortunately, he was able to have surgery followed by radiation and hormone treatment. It’s a lot to go through, but it ’s required for many patients with high-risk prostate cancer.”

After his experience, Claeys urges the men of his community to get screened.

“If I could rewrite the story, I would have gotten screened much earlier,” Claeys says. “Don’t let prostate cancer decide how your story ends. If you have the chance to write your own medical story, do it.”

Dr. Bockholt is currently accepting new patients and is available for (in-person and virtual) appointments at the HRMC Physicians Clinic on the first and third  Wednesday of every month. To schedule an appointment with him or another urologist, call (605) 353-7660.

To watch the rest of Arnie Claeys story, visit HRMC's YouTube channel. To learn what screenings you need based on your age, visit HRMC's Health Library.